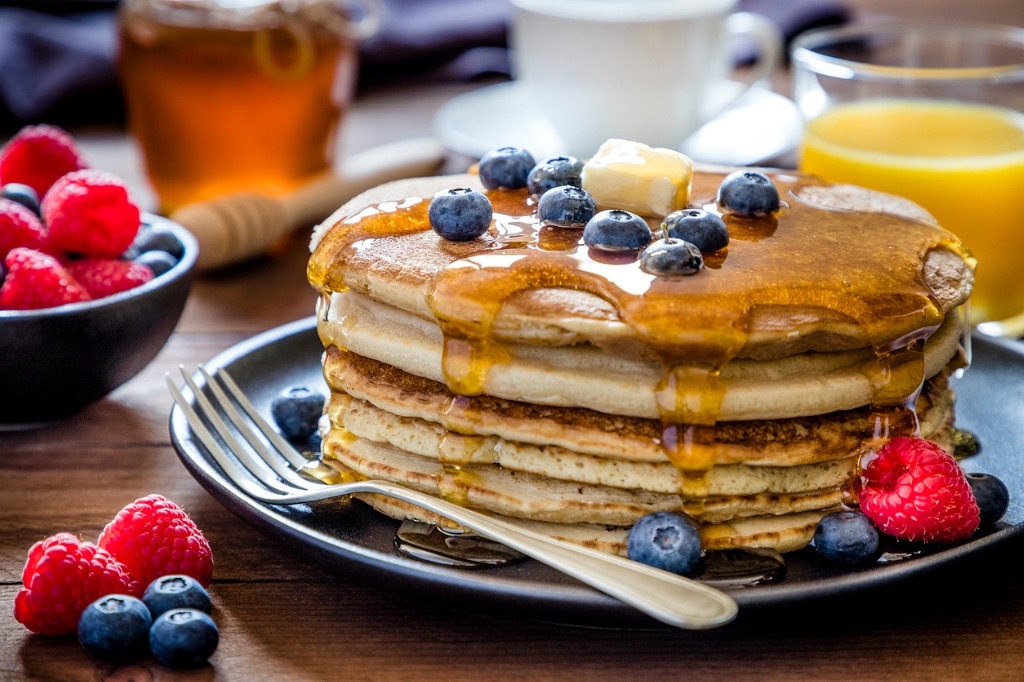 Pancakes are an American classic. Breakfast and brunch would simply be incomplete without these fluffy stacks of deliciousness piled high and served with syrup, butter, and all of your topping favorites.

While pancakes have probably been a part of your mornings for as long as you can remember, these fun little guys date back thousands of years! In this article, we will explore the history and traditions behind one of our favorite breakfast staples.

Where Did They Come From?

Pancakes have been around for centuries and are a staple in many cultures. Experts (pancakes experts?) believe that people enjoyed pancakes as far back as 30,000 years ago during the Stone Age. In fact, researchers found pancakes in the stomach of Ötzi the Iceman, famous human remains that date back more than 5,000 years! Actually, that’s kind of gross…

In ancient Greece and Rome, pancakes were made from wheat flour, olive oil, honey, and curdled milk. Ancient Greek poets Cratinus and Magnes wrote about pancakes in their poetry. Shakespeare even mentions them in his famous plays. During the English Renaissance, people flavored their pancakes with spices, rosewater, sherry, and apples.

Thomas Jefferson loved pancakes so much that he sent a special recipe from the White House to his hometown! We’d love to get our hands on that recipe…

Yep, you heard us correctly. Pancake Day is real! Shrove Tuesday (commonly referred to as Fat Tuesday) is the holiday of feasting before Lent. Once upon a time, during Lent, people were not allowed to eat animal products like milk, butter, and eggs.

To prevent them from going to waste, people cooked these ingredients into tall stacks of pancakes. They were consumed in such large amounts that this day earned the rightful name of Pancake Day.

Pancakes Can Be Found All Over the World

You may be surprised to find that pancakes exist all over the world. Each culture seems to have a unique take on them. People eat them for breakfast, lunch, and dinner all over the globe. Some examples of this transcultural food include crepes, potato latkes, Irish boxty, Russian blini, Welsh crampog, Indian poori, Hungarian palacsinta, and Dutch pannenkoeken.

Coming Down with a Case of… Pancake Syndrome

Everyone here at Kate’s Kitchen suffers from pancake syndrome, which we define as the love of, addiction to, and obsession with pancakes. However, as it turns out, “pancake syndrome” is an actual medical condition! It occurs in tropical regions when mites contaminate the flour used to make pancakes, which causes consumers to have an allergic reaction. YIKES!

Get ‘Em While They’re Hot!

Pancakes come in many different shapes, sizes, and flavors. They can be sweet, savory, thick, thin, small, or large, but they are all delicious! While there are many styles of pancakes, we like to keep it classic with traditional American-style pancakes at Kate’s Kitchen.

You can have your choice of Banana, Craisin and Granola, Blueberry, Apple and Pecan, or Cinnamon and Roasted Pecan served fresh off the griddle with butter and maple syrup. YUM!

Pancakes have really stood the test of time with their extensive history all over the world. They hold a special place in our hearts, reminding us of comfort, family meals, and Saturday mornings. We’re looking forward to seeing you soon at Kate’s Kitchen!

Sunday’s are meant for rest, relaxation and family. But that doesn’t mean your Sunday shouldn’t…