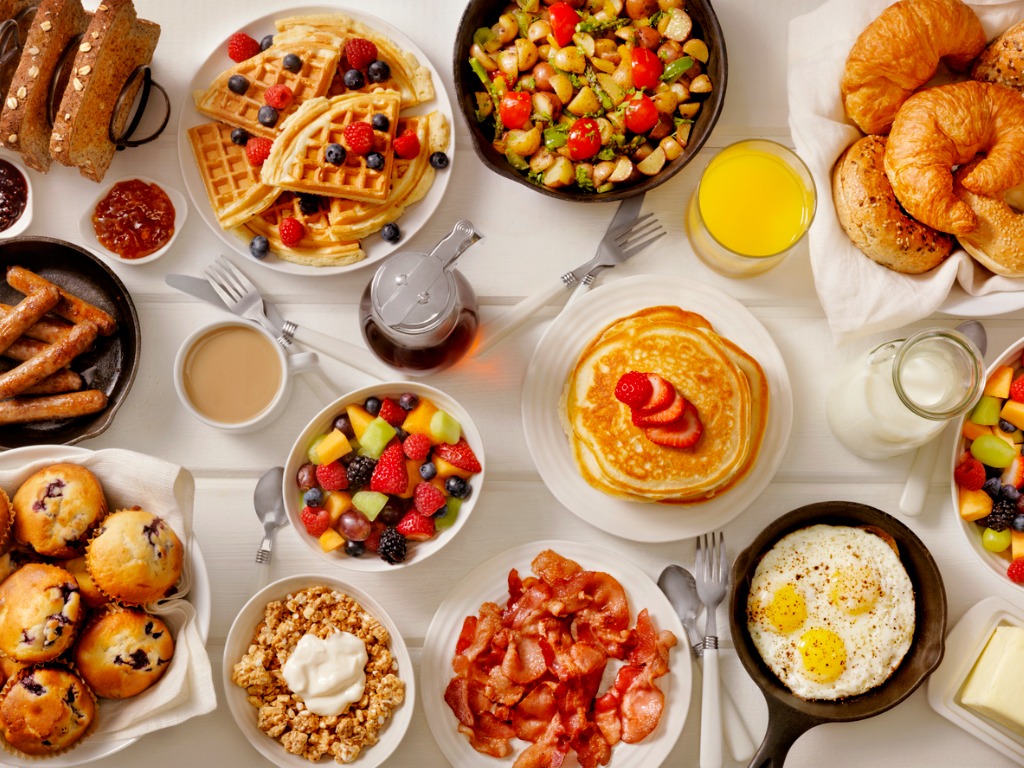 Pancakes, or a simple recipe similar to what we call pancakes, have existed for as long as people have had access to grains, fat, sugar, milk, and fire. Yes, chances are that some of those ancient cave paintings are pancake recipes committed to history by a Stone Age Martha Stewart!

The recipe was so tasty that people reinvented it throughout the world and throughout time whenever they mixed the four magic ingredients, added historically relevant flavors, and poured the batter into a cooking vessel. Pancakes cook quickly, making it easier to bake them in large quantities, which helps explain their incredible popularity over the centuries.

Waffles started from a similar idea, but they had to wait to come into existence until someone thought to put the ancient pancake batter between two decorative plates. If you’re wondering, someone thought of doing that during the Medieval period in Greece, which means waffles are a little baby breakfast compared to their much older big brother pancakes. If you ask us (or if you try our waffles, you’ll know), they were definitely worth the wait!

Fun Fact! The first waffle irons appeared in the early Middle Ages after the invention of a metal press used to make communion wafers. The wafer irons were much smaller and decorated with significant religious imagery, which inspired the creation of much larger irons with purely decorative images that people used to make the first waffles.

“Hey, wait! Those ingredients are exactly the same! So what’s the difference?”

Well, my uneducated friend, it’s all in the ratios. Pancakes have more baking powder to help them rise in the pan, while waffles have more butter and an extra egg to help them form their slightly crispy, golden brown outside and soft, chewy inside.

Tip! If you’re making waffles from a store-bought pancake mix, add double the fat and double the eggs the recipe calls for to achieve the correct consistency for classic waffle batter.

You can make pancakes on the stovetop in a frying pan, on a griddle, or even (if you’re making a super thick and jiggy Japanese café-style pancake) a springform pan baked in the oven. However, waffles are the obvious diva of this duo and require an appliance dedicated explicitly to them.

If you’re a minimalist in the kitchen and don’t buy single-purpose kitchen gadgets, we’ll still recommend that you have a waffle iron in your cupboards because everybody loves waffles!

Waffle irons come in vintage round or multi-square designs, or you can go for a Belgian waffle maker that produces larger thicker waffles. Finally, you can find no end of novelty waffle irons ranging from super small palm-sized waffles to waffles that feature designs like dinosaurs, faces, or holiday themes.

So, what does this all mean? The different ratios of ingredients and different preparation methods result in two similar, but also drastically different, classic breakfast foods.

Pancakes are soft and fluffy, somewhat dense, and ideal for soaking up syrups and sauces. Waffles are crispy on the outside, chewy on the inside, and full of perfect little divots seemingly designed to hold puddles of syrup, whipped cream, fresh fruit, and even ice cream if you want more of a dessert-inspired waffle (which is the perfect final course for your multi-course breakfast for dinner if we do say so ourselves!).

Both pancakes and waffles are traditionally delicious, topped with butter and drowned in maple syrup. The pancakes will soak up all the liquids and turn into sweet sugar sponges, while the waffles’ crispy exteriors will slow that process, giving you little lakes of melted butter and maple pooling in the pockets.

The second most popular traditional pancake and waffle topping is fruit and whipped cream. You should top pancakes with slightly muddled fruit to help release some of the fruit juice since the point of pancakes is to be a delivery system for whatever sweet and syrupy topping you place upon them.

Waffles can be topped with fresh-cut fruit more easily since they don’t need liquid to make the most of their contrasting textures—but don’t forget the whipped cream! It adds a light and fluffy cloud of sweetness that perfectly emphasizes the fresh, tart fruit flavors.

Fancy up your pancake game by swapping out half of the milk in the recipe for ricotta cheese (cottage cheese will also work), then add two tablespoons of lemon juice and about a cup of blueberries. Serve with fresh whipped cream and more blueberries.

Go bananas with your waffle recipe by substituting half of the milk in the batter for ricotta cheese (cottage cheese will also work here), then add a quarter cup of chopped walnuts and one chopped banana. Serve with fresh whipped cream and a light dusting of cinnamon sugar.

Time to think outside the sweeter side! For a waffle that’s fit for a hearty fall dinner, use cornbread mix in your waffle iron, and then top the waffles with chili, sour cream, cheese, and chives.

If you’re feeling more in the mood for pancakes, reduce the sugar in your pancake batter, then add grated cheddar cheese and finely chopped onions, or try out parmesan and herbs, then serve with sour cream and bacon on the side.

Still Don’t Understand the Difference Between Pancakes and Waffles?

Don’t worry. Kate’s Kitchen is here to help! We make the most delicious pancakes and waffles in all of Kansas City, making this the perfect place to come on down and try to figure it out for yourself!

The History of Pancakes
Have you ever wondered about the origins of one of the world's favorite breakfast foods? You can find some of the answers in this article!
An Ode to the Wonderful Waffle
Even Thomas Jefferson ate waffles. What's not to love?
How Do You Like Your Waffles?
We really wanted to talk about the delicious breakfast treat that is, waffles. You can enjoy them a ton of different ways, and let's be honest, they are a breakfast favorite! Let's hear it for waffles!
Copyright © 2022 Kate's Kitchen & Ronnie's Restaurant - All Rights Reserved
Back To Top