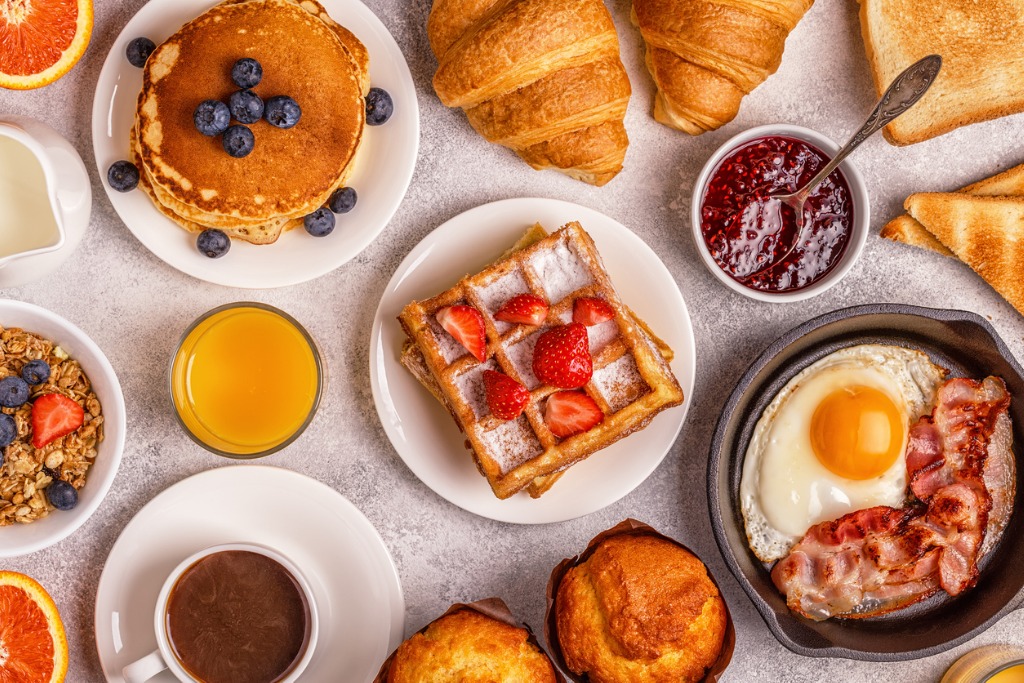 Ah, yes. Waffles versus pancakes. The endless debate. Which one is best?

Let’s say today is your last day on planet earth. You have a choice between pancakes and waffles for breakfast. Which one do you choose? Tough question, isn’t it?

Pancake batter and waffle batter share many ingredients, such as flour, sugar, eggs, and a leavening agent like baking powder. They’re so similar, yet so different, all at the same time.

Let’s end this debate! We’re going to make cases for both waffles and pancakes being the better breakfast choice, and at the end, we’ll decide which one reigns supreme. Place your bets now!

The Case for Pancakes

Pancakes are soft, fluffy, and delicious. They’re like pillows that you can eat AND rest your head upon!

Wait, no. We wouldn’t recommend resting your head on a stack of pancakes. You might get funny looks.

There are tricks and techniques, passed down from generation to generation, created by the gods themselves, to achieve the fluffiest pancakes of them all… but you might as well save yourself the trouble and just order some pancakes from Kate’s Kitchen instead. Our pancakes are among the fluffiest and most delectable you can find in the galaxy.

We might have lost ourselves for a moment there. That tends to happen when we think about pancakes for a prolonged period of time.

There are simply so many options when it comes to pancakes. You can have a classic cake slathered in butter and cascaded with maple syrup, spread peanut butter on it, or mix chocolate chips, blueberries, and other ingredients into the batter. Or, you can do a mixture of all of that! The possibilities are endless. 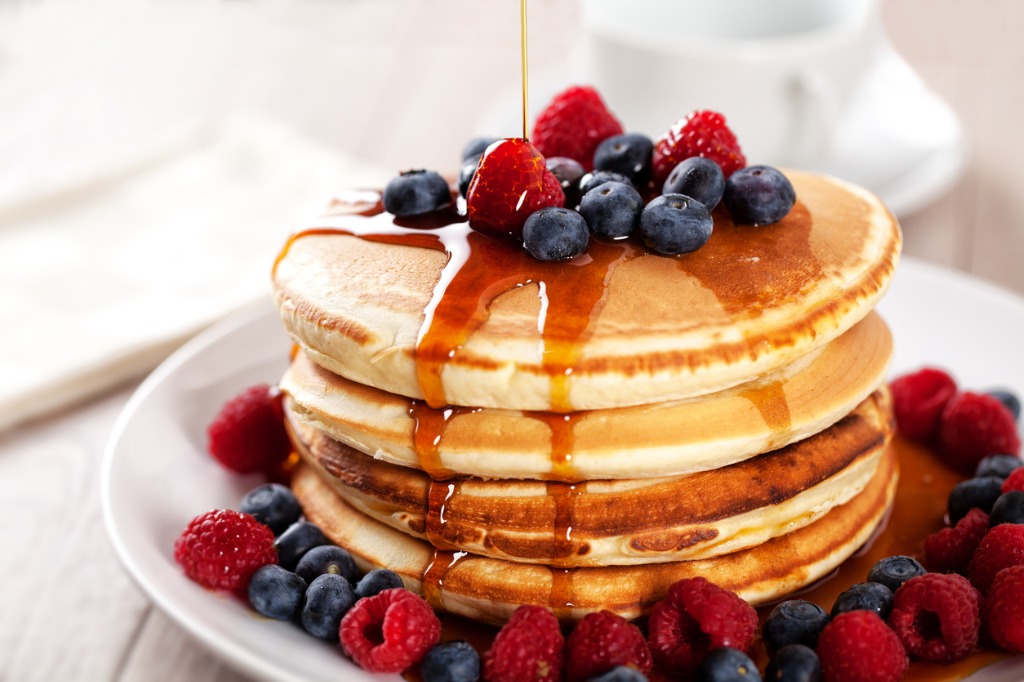 Of course, pancakes are also hiding an ultimate weapon: the short stack! Although, we’re not really sure why it’s called a short stack, as these stacks can get pretty large. In any case, pancakes can be stacked. The debate is over.

No, we’re just kidding, but feasting on a stack of pancakes is undoubtedly an advantage that pancakes have over waffles.

I mean, sure. Can you technically stack waffles? Of course. But, were they really made to be stacked?

Pancakes were genetically engineered, created in a lab to be perfectly stackable. Their fluffy nature and flat surface lend well to stacking.

You can stuff ingredients, like peanut butter and syrup (or even ice cream…), in between each pancake, and whatever ingredients you put on top will eventually soak through and ooze into every last cake. This multi-layered tower of deliciousness may look insurmountable, but it is actually beckoning for you to devour it.

We’re serious! Next time you order a stack of pancakes, take a moment to listen closely, and you’ll hear the whispers of the pancakes begging for you to bring them to the promised land: your belly.

The Case for Waffles

Next up on the chopping block, we have waffles. People often consider waffles the cousins of pancakes, and a common misconception is that they have a friendly relationship. However, the opposite is true. Pancakes and waffles have an ancient rivalry that dates back to the age of the dinosaurs.

While pancakes are fluffy, soft, and airy, waffles have crispy, golden-brown edges and chewy centers. You can quickly identify a waffle by its plaid texture, the result of being cooked in a waffle iron.

These square holes are quite possibly the greatest advantage that a waffle has over a pancake. Since pancakes are cooked on a griddle, they are flat, but waffles have these little indentations that, when filled with ingredients like syrup, butter, nuts, and peanut butter, turn into flavor pockets of gooey deliciousness.

We would argue that the one disadvantage of these pockets is that they can make it challenging to spread butter sometimes, especially if it isn’t softened. This is a trade-off that has to be taken into serious consideration. 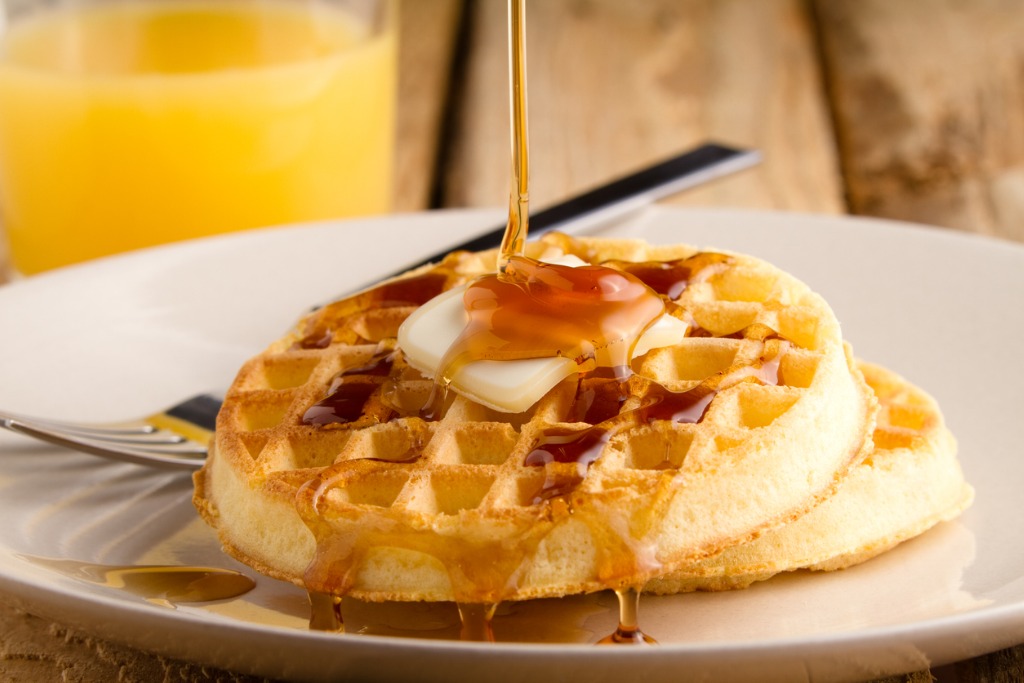 Alright, so pancakes can be stacked. Aside from pockets… what do waffles have going for them? Don’t you fret, as waffles have a couple of tricks up their sleeves.

Say you want the light and fluffy airiness of a pancake with the flavor capsules of a waffle. Most people would say you’re crazy! But the Belgian waffle would whisper in your ear and say, “you can have the entire world if it is what you desire…”

For those looking for the best of both worlds, the Belgian waffle is the perfect choice. These waffles are a LOT fluffier and more substantial than the thin and crispy American-style waffles. They have much deeper pockets to hold goodies, and their consistency is much closer to that of a pancake.

However, the Belgian waffle isn’t even the waffle’s ultimate weapon. But, “how could that be?” you ask. What could possibly be more powerful than a Belgian waffle?

The waffle’s all-powerful, awe-inspiring, world-destroying secret power… chicken and waffles! Depending on who you ask, chicken and waffles is the checkmate, the ace in the hole, and the end-all-be-all argument against pancakes being better than waffles. Eating fried chicken and waffles at the same time is quite possibly the most incredible innovation of the last 1,000 years.

Pancakes or waffles? Waffles or pancakes? Which is truly the breakfast best? Which do you choose if it’s your last day on this planet?

Today is likely not your last day on earth, so order waffles today and pancakes tomorrow (or vice versa)! It all comes down to personal preference.

If you love pancakes and passionately despise waffles, so be it! We still love you! Everyone is entitled to their opinion.

Whether you prefer pancakes over waffles or waffles over pancakes, at Kate’s Kitchen, we offer both, so it doesn’t matter. Our pancakes and waffles are the most delectable in the state of Kansas, and we are looking forward to sharing them with you. Come and visit us whenever the urge for a delicious and hearty breakfast hits you!

22 Healthy Breakfast Foods You Should Be Eating!

Our Favorite Winter Breakfasts to Celebrate the Holiday Season!
It's beginning to look a lot like Christmas, so your breakfasts should too! We've put together a list of our favorite winter breakfasts.
10 Reasons Why Breakfast Is Important
We all know the phrase: Breakfast is the most important meal of the day. But do you need to be convinced? Well, here are our ten reasons!
Copyright © 2023 Kate's Kitchen & Ronnie's Restaurant - All Rights Reserved
Back To Top