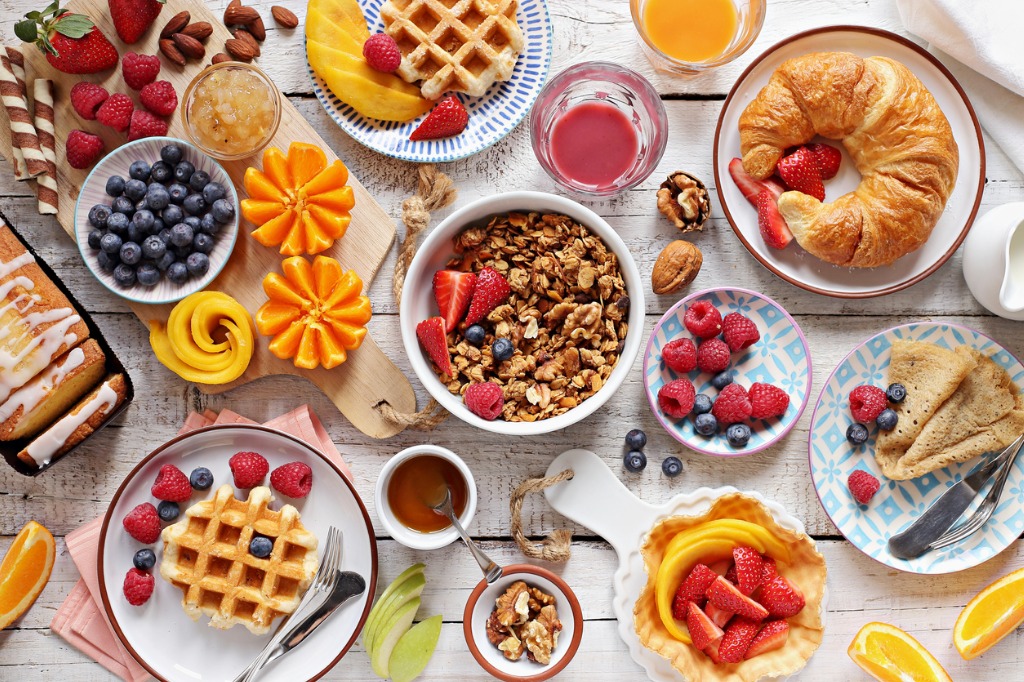 Here at Kate’s Kitchen, we love a good breakfast, and we also love facts and trivia—so we’ve put these two great tastes together just like putting maple syrup on a delicious stack of waffles for your brain. Get reading to learn some things you definitely didn’t know about breakfast!

The term “breakfast” didn’t exist before the 15th century, and the idea of specific breakfast foods is even more recent than that—sometime after the late 1800s. However, cultures throughout history have had different expectations for a morning meal.

Ancient Egyptian laborers ate a breakfast of bread and beer before beginning their workday. This is because grain was a staple crop of Egypt, making both bread and beer an affordable way to feed the working class. Those of higher means would add vegetables and a small amount of meat to their morning meal.

Breakfast in the Middle Ages

In the Middle Ages, breakfast was considered too indulgent by the Medieval church, which believed it bordered on gluttony. Typically, this meal was only eaten by laborers and travelers who were thought to need the extra food. Even so, the meals they ate usually amounted to a modest slice of hard bread with a scrap of cheese and ale.

Continental Breakfast in the 19th Century

Breakfasts Around the World

Rustic and classic at the same time, a typical French breakfast is as simple as slices of fresh-baked bread served with jam and butter. It’s, of course, served with fresh coffee, which is a convenient dip for the buttered bread, in case you’d like your bread to have more of a coffee flavor.

Italian espresso bars aren’t like your typical neighborhood Starbucks! Besides the locally sourced and better-quality coffee beans prepared by master roasters, many espresso bars in the country don’t have seating. There’s a bar with baristas and equipment on one side and customers on the other, with a minimal standing section for customers to finish their drink and get on with the day. For breakfast, espresso is usually paired with pastry.

A traditional English breakfast features eggs, sausages, bacon, beans, hash browns, fried mushrooms and tomatoes, and toast—all served with a side of black pudding, a blood sausage made of pork blood and fat, with added grains to give a firmer consistency. First served as a morning meal for laborers who needed something to keep them going through the day, a Full English is now more commonly served as a hefty Sunday brunch intended to prepare the diner for a long Sunday nap.

Not to be outdone, Canadians have their own version of the previous dish. The version this side of the pond includes eggs, fried pork, and flapjacks, which provide ample calories for a hard day of hard work, like Lumberjacking, hence the name.

Served hot or cold at breakfast time, soy milk is paired with a traditional Taiwanese breakfast made up of scallion pancakes, fritters, and dumplings. The soy milk is a perfect complement to the fritters, which are customarily dipped in the soy milk as they’re eaten.

Before tea and coffee started getting all the attention, the Ottoman Empire enjoyed drinking salep, which was made from Turkish orchids in a process similar to chai tea. In modern Turkey, the drink is believed to help cardiovascular health and lung function and is sometimes used as an aphrodisiac.

Yak Butter Tea in the Himalayas

Say hello to bullet-proof coffee’s great great granddaddy! Since yaks are native to the Himalayas, they’re farmed for dairy and wool. Traditionally, Himalayan people would drink black tea to keep warm in the harsh cold and adding some yak butter was the obvious next logical step (and we ask you, who among us?). This drink has remained popular for centuries, so there must be something to it!

The Most Important Meal of the Day

If the gas gauge on your car says ‘E,’ it’s a good bet that you won’t be able to drive very far, and the same is true of your body. Numerous studies show the many different benefits of eating breakfast and the detriments of skipping it. To make the most out of your most important meal, try to eat breakfast within two hours of waking, and make sure to get a good mix of macro-nutrients: a breakfast including protein, carbs, and some healthy fats will help you stay focused until lunchtime!

Take a look at our breakfast menu