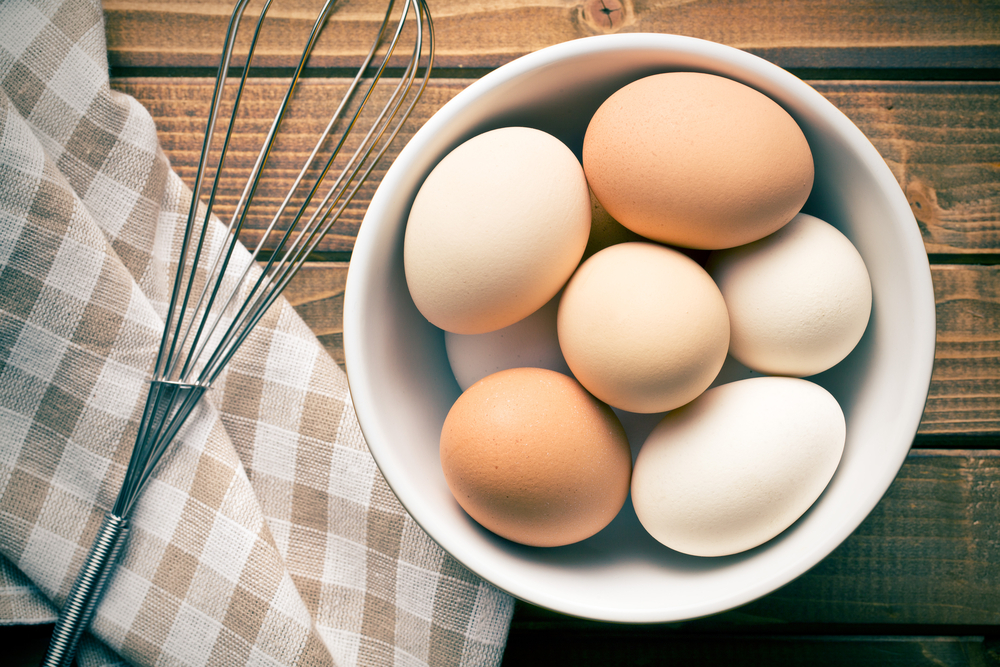 Eggs are arguably the quintessential breakfast food. Everybody knows that there are multiple ways to prepare your eggs, but when you saw the title of this article, you were probably thinking “there’s no way that there are fifteen different ways to cook eggs.”

Well, there are, and we’re going to prove it to you! In actuality, there are way more than fifteen ways to prepare eggs, but we don’t want to overwhelm you too much :)

Sunny-side-up is one of the most recognizable styles of eggs. To cook your eggs sunny-side-up, crack the egg directly into a hot frying pan (make sure it is greased with butter or cooking spray) and let it cook.

Once the egg whites have cooked through, remove the egg from the pan without flipping it over. If you do flip a sunny-side-up egg, it becomes an over-easy egg. The runny yolks that are a staple of sunny-side-up eggs are perfect for dipping toast and English muffins into.

This is an easy one. See what we did there? However, the “easy” in the name does not refer to this cooking method’s simplicity. The terms “easy,” “medium,” and “hard” actually refer to the state of the yolk after you stop cooking the egg.

Crack the egg into your frying pan, and let it fry until the edges are slightly brown. Then, flip the egg over and let the other side cook as well. Eggs cook fast, so remove the egg from the pan once a thin white film has appeared obscuring the yolk.

When sliced open, the egg yolk should be runny. If you cook the egg on its second side for too long, it will become an over-medium egg.

The yolk is still runny, but the edges are browner, the egg white is more thoroughly cooked, and the film that covers the yolk is slightly thicker. Over-medium eggs are perfect for those who like the dipping quality of fried eggs but don’t want their eggs to be overly liquidy.

Over-hard eggs are the final evolution of the fried egg. The egg is fried, flipped, and fried again, but this time, the second side of the egg is cooked for much longer. Usually, until both the egg yolk and the egg white are cooked all the way through.

Some people also break apart their yolks when cooking eggs over-hard. This can be easily done by poking the yolk with a fork or spatula just before flipping the egg.

Because over-hard eggs are cooked all the way through and are not runny, they are the perfect choice for a fried egg sandwich!

An egg-in-a-basket is an alternative method of frying your eggs. To make one of these delicious concoctions, simply fry an egg in the middle of a slice of bread that has a hole ripped into it. What you’ll end up with is a piece of toast that has an egg fried into the middle of it!

Moving on from fried eggs, now we get to boiled eggs. The “hard” in hard-boiled refers to the consistency of the egg white and the yolk after the eggs have been boiled.

Hard-boiled eggs are incredibly easy to prepare. Simply fill a pot with boiling water (enough to cover your eggs by about two inches) and boil the uncracked eggs for about ten to twelve minutes.

Before you can eat hard-boiled eggs, they need to be cooled and have their shells peeled off. An easy way to do this is to transfer them to a bowl of ice-cold water after they have finished cooking.

Once they are cooled, gently tap the eggs against a hard surface to crack the shell. This allows for easy peeling. Hard-boiled eggs can be stored in your refrigerator for later use. We love to drizzle them in olive oil and sprinkle them with salt and pepper!

Deviled eggs are a method of preparing and serving hard-boiled eggs. After the eggs have been boiled, cooled, and peeled, slice them in half lengthwise and remove the egg yolks using a small spoon.

Then, mix all the egg yolks together alongside other ingredients like mayonnaise and mustard. There are several ways to prepare deviled eggs, so experiment and figure out what you like best!

Mix in some of your favorite spices like paprika, chill the yolk mixture, and then spoon the mixture back into the egg whites. Yum! Deviled eggs are a perfect accompaniment for any social gathering.

Soft-boiled eggs are not as popular as hard-boiled eggs, but they are arguably just as delicious!

Instead of boiling the eggs all the way through, cut their cooking time to around six minutes. This ensures that the egg whites are cooked, but the yolks are left runny.

Soft-boiled eggs act as an excellent topping for toast, and sometimes they are eaten straight out of the eggshell, served in small egg-shaped cups.

Scrambled eggs are arguably the king of all eggs. They are one of the most common methods of preparing eggs at restaurants and are often served with bacon, sausage, hash browns, and toast. They’re also super easy to make too.

An egg that is scrambled means that the yolk and the whites are whisked together prior to cooking. Hard scrambled eggs are cooked in a greased pan all the way through and are served completely dry.

Eggs cook FAST, so if you want to make great soft scrambled eggs, make sure to keep them constantly moving in a greased frying pan and do not step away from the pan.

If you let these eggs cook for too long or you cook them on anything higher than medium heat, they will quickly turn into hard scrambled eggs. 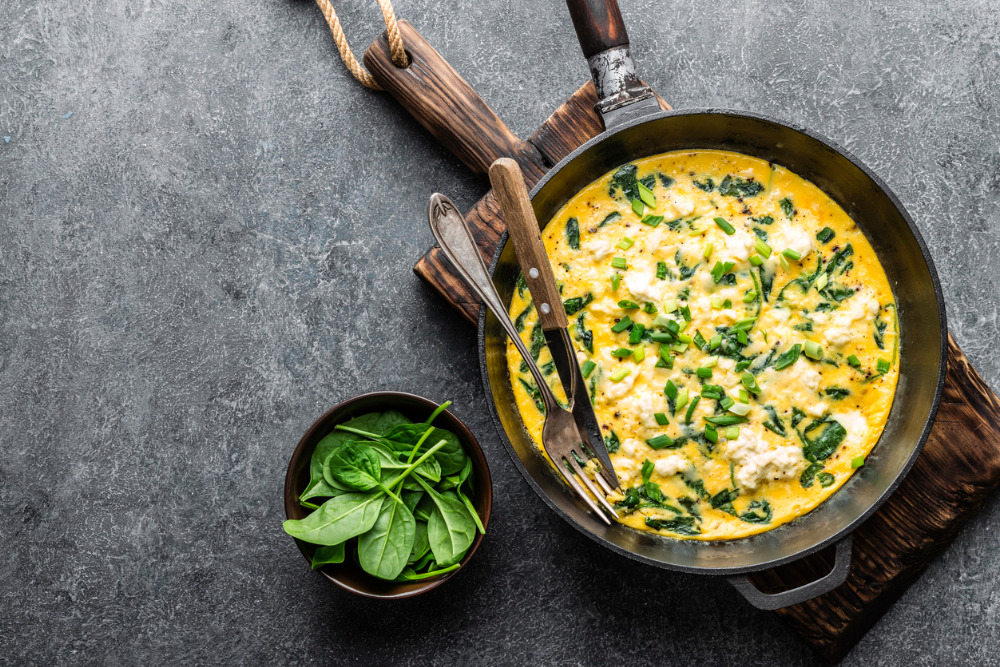 We love to mix other ingredients into our scrambled eggs like chicken, spinach, shredded cheese, mushrooms, sausage, and tomatoes. This is typically referred to as a scramble or a hash.

We’re counting omelets and frittatas as two separate methods of cooking eggs. However, they’re so similar that they hardly warrant separate sections.

Omelets are an infinitely-customizable variation of traditional scrambled eggs. Omelets are scrambled eggs that are cooked into a stabilized form and filled with all kinds of ingredients including meats, cheeses, vegetables, herbs, and spices.

The omelet is folded back over onto itself, encapsulating the delicious ingredients within. Some people like to broil the top of their omelet after they have folded it over.

A frittata is essentially an open-faced omelet. It is still loaded up with ingredients, but it is not folded over onto itself. See? Completely different.

Other Methods of Preparing Eggs

Basting is a method of cooking where juice or fat is continuously poured over a food (typically meat… think of a basted turkey) while it is cooking to keep it moist.

One easy way to baste an egg is to fry it in melted butter and continuously scoop the butter on top of the egg. This makes it so you can cook the top of the egg without flipping it as you would with an over-easy egg.

If you pour the butter over the egg quickly enough, you can cook it all the way through before the whites start to brown. This result can also be achieved by poaching the egg. Speaking of which…

Poaching an egg is similar to boiling an egg, except t it is cooked without its shell in simmering water (around 185-190 degrees). Poaching an egg is slightly more involved than other preparation methods, but with enough practice, it is rather easy as well.

Start by cracking your egg into a custard cup, and heat around one-and-a-half inches of water in a non-stick saucepan to a simmer. 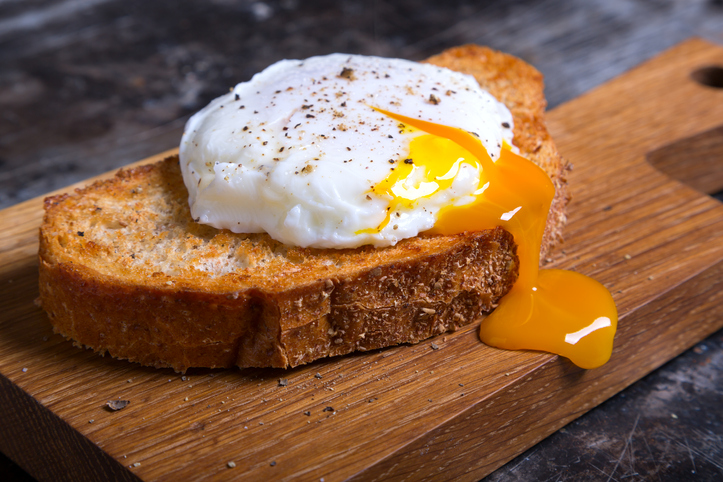 The result should be similar to an over-medium egg but without the browned edges. You can either eat the egg immediately or place it in ice-cold water and store it in the fridge for up to eight hours.

Poached eggs are often served with ham or bacon on top of a toasted English muffin slathered in hollandaise sauce to create the endlessly popular eggs benedict.

Eggs florentine is a less meaty version of eggs benedict that substitutes the ham for spinach. Or you can have your cake and eat it too by simply adding the spinach beneath the ham. Both are totally acceptable (we would never judge anyway).

Learn from Alton Brown how to cook a poached egg!

Shirred eggs are also referred to as baked eggs. They are typically baked in a flat-bottomed dish alongside butter and other ingredients until the whites are cooked through and the yolks are still runny. Most of the time, shirred eggs are served in the dish they were baked in.

There you have it! Fifteen different ways to cook eggs. There are actually more ways of preparing eggs that we didn’t even talk about, not to mention all the different dishes that you can make with eggs like quiches, breakfast burritos, and huevos rancheros!

If you’re hungry for some breakfast but don’t feel like making it yourself, come and visit us over at Kate’s Kitchen in Gladstone, Missouri, or Ronnie’s Restaurant in Lenexa, Kansas! Our ever-popular dishes are guaranteed to start your day off on the right foot.

22 Healthy Breakfast Foods You Should Be Eating!

Our Favorite Winter Breakfasts to Celebrate the Holiday Season!
It's beginning to look a lot like Christmas, so your breakfasts should too! We've put together a list of our favorite winter breakfasts.
10 Reasons Why Breakfast Is Important
We all know the phrase: Breakfast is the most important meal of the day. But do you need to be convinced? Well, here are our ten reasons!
Copyright © 2023 Kate's Kitchen & Ronnie's Restaurant - All Rights Reserved
Back To Top